The Bishop of London argued this week that we have a moral obligation to be environmentally friendly and that jetting away for a holiday is a sin. The geographer and journalist (and former CTC staffman - ed), Nicholas Crane, who chose nearly 10 years ago never to fly again, explains his decision. 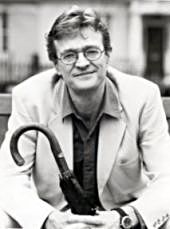 'A man of courage has spoken. The Bishop of London, the Rt Rev Richard Chartres, has categorised flying as "a symptom of sin". The pressure on non-essential flying has been building for months. It just needed a public figure to take a stand against it.

Climate change has already changed my life for the better. In 1988, I went to a lecture at the Royal Geographical Society given by a scientist called Dr Michael Rycroft. He presented data revealing that man made chemicals had opened a hole in the atmosphere's protective layer of ozone. The hole above the South Pole had actually been discovered in 1985 by three British Antarctic Survey scientists. Sheep were reportedly going blind in Patagonia, and if the ozone shield could not be repaired, humans too would suffer from increased ultraviolet penetration.

After the lecture, I walked across Hyde Park in the dark, numb with shock. I knew that the atmosphere was thin, but Mother Earth's filtration and recycling systems had always seemed capable of neutralising or absorbing pollutants. The implications of an unstable, perforated atmosphere were frightening.

Then came "global warming". Nothing, but nothing since the last Ice Age has posed a bigger threat to mankind. Some scientists think that we may have 10 years to make a sharp reduction in carbon-dioxide emissions. Other s think it is already too late, and that mankind will be lucky to last until the end of the century.

My own culpability in this man made mess is considerable. For the best part of 20 years, I worked as a travel writer, and although nearly all the books I wrote were based on journeys by bicycle or on foot, I often flew to my chosen country. From the earliest days of the global-warming issue, flying has been implicated as a significant contributor to atmospheric overload. I took flights to South America, to Africa, to the Caribbean. I once flew to Australia for just a week. The articles I wrote tended to fizz with enthusiasm for the places I had been investigating. I don't know how many readers booked flights after reading these articles. A s I type these words, it's impossible not to be wracked with guilt.

In 1995, I realised that I would have to stop flying. Even then, you had to hide your head in a very deep sandpit to avoid the warnings about global warming. Being a Fellow of the Royal Geographical Society made them even harder to dodge. Not only were there lectures on CO2 emissions and climate change, but conversations in the bar and tea- room invariably swerved towards the geographical apocalypse. But in giving up long-haul travel, I had two problems. How could I continue to make a living? And how would I deal with travel denial?

In 1996, I tentatively began seeking commissions that I could undertake by train. I cycled two new bike routes, hiked along the coast of Devon and took Eurostar to central France then walked an ancient drove road across the bleak limestone plateau on the edge of the Cévennes. In the spring of 1997, I took my last flight as a travel writer. It was to visit one of the few remaining wolf habitats in Europe, up in the mountain wilderness of Portugal's Trás os Montes. While there, I was shown a recently discovered and exquisite set of petrogylphs. They revealed a lost land, teeming with game. The carvings had been made between 10,000 and 30,000 years ago, before the ice sheets bore down from the north and the Big Chill took out the habitats of northern Iberia.

Two months later, I took a train to Berwick-upon-Tweed, and began walking from the Scottish border to the English Channel. This became a book called Two Degrees West, and led to a stream of articles about England.

My conversion to "green journalism" was less alarming than I had anticipated. My career didn't grind to a halt. I reacquainted myself with Britain and found a land of many wonders. Newspapers and magazines wanted to buy stories on the Welsh National Cycle Route, on fossil-hunting in Dorset and on camping in the Hebrides. I still miss the wider world. There are places that I will never see. Patagonia, Antarctica, Alaska and the Kunlun Shan will remain off limits - unless I sail, cycle and walk there.

But how big a personal price is this, really? A long time ago, I rode a bicycle through Bangladesh. On dirt roads between paddy fields, my cousin and I pedalled alongside throngs of laughing children. We ate curries in shacks while entire villages turned out to admire our bikes. Much of Bangladesh will be flooded by the end of the century, if not before. Millions of Bangladeshis will become homeless. How can I look a Bangladeshi in the eye and claim a right to fly?

Two years ago, I tried hard to get a television series and a book commissioned on climate change. I was told Britain's viewing and reading population would not be interested in global warming: climate change was too "confrontational". Instead, I threw myself into projects concerned with British landscapes.

Map Man and Coast, on BBC2, showed how our archipelago has changed through time. These exposed isles have always enjoyed (and suffered) dynamic topographies. Coastlines have changed dramatically over the past 10,000 years, and are likely to change again - catastrophically in some places - over the next 100 years. The series I am working on now, Great British Journeys, looks at eight great travellers who "discovered" Britain. The books they left behind are snapshots of landscapes in the throes of dramatic change. The series may not be "confrontational", but it will, I hope, reveal how dynamic and fragile our habitats are.

Giving up aircraft entirely is a tough call. There will always be compassionate and professional reasons for flying. And of course it's all very well for me to give up air tourism after winging around the world for a couple of decades. Why shouldn't the next generation have the same fun? Well, I have no answer to that. There isn't any option but to give up all non-essential flying. The latest prognoses are so terrifying: at current rates of CO2 emissions, mankind's difficulties could well start in the next few decades.

The crisis is immediate and needs an instant response. I don't feel guilty that my children - 11, 10 and six - have never flown, and I don't believe that I am retarding their engagement with the world. They are curious about aircraft, but know from what they learn at primary school that they cannot live their parents' lives. It is they who deliver the teatime seminars on the need to recycle plastics and papers, and on the effects of carbon dioxide.

Among the people I know well, the "non-adaptors" to climate change are well-informed adults. I am absolutely mystified by this. It is no longer possible to claim that there is no connection between human activity and climate change. Or that climate change should be welcomed because it will bring vineyards to Clydeside. Or that aircraft emissions are good for the planet because they add a reflective heat-shield of pollutants to the atmosphere.

"Eco-tourism", if it involves flights, is no way round the issue, either. A "green holiday" in Costa Rica won't remove several hours of jumbo emissions from the atmosphere. Nor will "offsetting" the emissions - by contributing to the cost of planting new trees that will in time soak up CO2 - at a conscience-salving website really make your journey "carbon neutral". Better not to fly and plant the trees anyway.

The Bishop of London has raised the stakes and made air travel a matter of conscience. While the financial price has fallen, the environmental cost has risen. It is no longer a question of "where to?" and "how much?" but of "why fly?" It is a moral question that we need to ask ourselves each time our fingers hover over the "confirm booking" tab on an airline website.

There are other options. Britain and Europe offer a lifetime's worth of travel, all of which can be done by land and sea. Why go to New Zealand if you haven't seen the sun set over the Hebrides?

In the sense of the Old Testament Hebrew term for sin, ht, meaning to "miss a goal or way", the bishop is also making a secondary point. For every holiday flight abroad we take, we are missing the chance to explore and enjoy our own magnificent archipelago'.

Is flying for holidays sinful? If so, are you prepared to give it up? Share your views on our message board at www.telegraph.co.uk/travelviews

The European parliament called for airlines to pay tax on aviation fuel and to be brought into the EU's carbon emissions trading scheme. MEPs approved the proposals in a 439-74 vote intended to encourage the European Commission as it drafts laws designed to cut greenhouse gases from aviation.

Trial scheme: The report recommended that the airline industry's exemption from paying Value Added Tax (VAT) on fuel should be scrapped, and an additional fuel tax should be brought in.