Why cyclists are reluctant to Stop

CTC, the national cycling organisation has a membership, including affiliates, of over 70,000. Within its ranks it has a network of 300 or so volunteer rights campaigners who respond to local issues which may present a threat or an opportunity to cycling. Many of these individuals keep in touch through an internet group line where they discuss matters of mutual interest. There are many interesting points raised, and recently Chris Juden, CTC’s Technical Officer, offered some original thoughts on why cyclists prefer to keep moving, rather than stopping and starting.

You may find this paper not just of academic interest, but feel it goes right to the heart of why many cyclists complain that cycle paths and lanes, instead of encouraging continuous and uninterrupted cycling, seem designed to present obstacles at every opportunity. Chris investigates here the principles of dynamics and motion that discourage us from using our brakes. So here we go......

Why Cyclists Don’t Like Stopping or, put another way, There’s more to Kinetic Energy than meets the eye !

When one rides a bike, one soon learns that stop-go cycling is whole lot harder work than to keep on rolling at a steady speed. However it's clear that the people who design British cycling facilities do not share this tacit knowledge – unlike in other countries! So I thought it might help if I investigated the engineering principles that discourage us from using the brakes and explained the wasted energy in simple terms of extra distance ridden.

Everyone likes to keep moving, but cyclists have more reason than most for 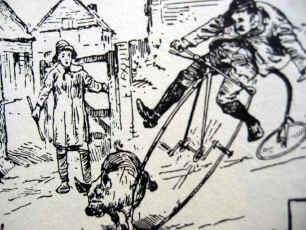 conserving their momentum. Riding a bike at a steady speed takes only about as much energy as to walk at one quarter that speed. Twelve mph cycling equates to 3mph walking and these are typical speeds for purposeful cycling and walking. Each requires about 75W of power from the "human engine" and people are as happy to cycle four miles to work as they are to walk one mile. Each should take from 20 minutes up to half an hour, including stops, at a total energy expenditure of some 100kJ.

Every time a cyclist or pedestrian stops, they lose kinetic energy and have to work harder upon starting off in order to accelerate and restore that kinetic energy. Kinetic energy is proportional to mass times speed squared, so to reach a steady cycling speed, four times that of walking, makes a 16-fold increase, plus a bit more (say 25%) for the extra mass of the bicycle, means that a cyclist has to expend about 20 times as much energy as a pedestrian in order to reach his normal journey speed. And because that speed is four times faster, that energy would have carried the cyclist 80 times further than the pedestrian, had neither been required to stop.

It is interesting to see just how far a cyclist could go, at a given speed, for the same amount of energy as may be required to reach that speed. This gives a direct measure of the energy cost of stopping. For typical cycling speeds of 10 to 12mph on a middling kind of bicycle, it can be calculated that one stop-start is equivalent to cycling an additional 100m. Compare this with the pedestrian, who can stop and start again with no more energy than it takes to make a couple of steps!

This explains why cyclists, when riding on the footway, are extremely disinclined to give way at side roads. Compared to a pedestrian, it adds a considerable extra distance to their journey. Of course a cyclist's journey is likely to be four times as long, so any given stop doesn't add such a big percentage to it (we're back to 20 rather than 80 times the trouble caused to a pedestrian), but by the same token, this means the cyclist will cross four times as many side roads in the course of such a journey. It also explains why cyclists sometimes find it easier to take a longer route without so many junctions.

The faster they go …

This calculation is affected by assumptions about the type of bicycle used and the effort expended by the rider. Fast cyclists have good reason to be more averse to stopping, since an energetic rider on a racing bike (200W, 22mph) would find it easier to add 200m on to his journey, rather than interrupt it. But even slow cyclists suffer significant penalties from stopping. For a leisurely rider on soggy tyres (40W, 8mph), each give-way costs at least 60m; and since such a person would be unlikely to walk faster than 2mph, the 80 to one comparison still holds true.

Just as a cyclist's higher speed and (slightly) greater mass inflate the energy demands of stopping and starting compared to a pedestrian, it requires a stupendous amount of energy to accelerate a fast and heavy car. Even compared to the energy consumption of a moving car, the cost of its acceleration is huge. Whereas a cyclist feels this cost directly, even painfully, in his legs, a motorist is hardly conscious of the energy expended when he presses the accelerator. (Pain arises but later, in the wallet, and is more readily attributed to the Chancellor of the Exchequer than driving behaviour!)

A cyclist caught in stop-start traffic becomes acutely aware of this difference in perception. The drivers will rush to close any gap that appears ahead of them – then brake – whereas the cyclist will try to conserve his energy and just keep rolling at a steady speed. If motorists were to follow suit, it might lend credence to their claims that fuel is expensive!

My simple equation of cycling distance to the energy cost of stopping, on the other hand, assumes that the cyclist brakes and accelerates very suddenly. If he were instead to cease pedalling some distance before the stop and let his kinetic energy decay naturally and then accelerate very gradually, spreading the process over an appreciable distance, the cost of stopping would largely be absorbed in that distance. It would instead cost extra time. In practice there is a trade-off between extra time and extra distance or energy. The cyclist chooses his own compromise, braking and accelerating hard if he is short of time, going easy if he is short of energy. In any event, the comparison with distance holds true, since that also gives a valid and convenient estimate of the additional time a journey may take if it involves a stop.

Here’s a nice riddle: what vehicle is easier to control when it’s moving than when it’s standing still? You know the answer. Bicycles are like the Sundance Kid – better when they move! Upon starting and stopping a bicyclist manages a complex transition between static and dynamic stability. With practice this can become automatic, but it is something which less experienced cyclists continue to find quite difficult – even risky.

The same for everyone

Some people assume that it’s only those speedy enthusiasts who won’t stop: that slower novices and children – the ones they really care about – simply will not mind. How wrong they are. All cyclists suffer a penalty that is roughly proportional to their speed and hence imposes an equal delay. And whilst all will try to avoid the inconvenience of dismounting, those for whom balance is still a challenge have the greatest incentive to keep on rolling. Children are especially disinclined to stop and have the very least regard for road markings.

The results of going against human nature are all too sadly predictable. Indeed this is not a peculiar cussedness of that easily discountable minority group: "cyclists". Let anyone ride a bike; they immediately discover that compared to walking, stopping is a grievous waste of hard-earned momentum and an unpleasant disturbance of equilibrium. Regardless of sex, age, colour or creed, they’ll all just want to keep those two wheels rolling!

Well I hope you find that useful and are able to persuade the planners to make the cars stop instead – they can do it so easily!


If you are passionately interested in promoting the benefits of cycling and would like to know more about the CTC Rights Network, you are most welcome to contact Roy Spilsbury, Rights Coordinator for Wales, on email roy.spilsbury@tesco.net