This ride starts from a Pay and Display car park by the Tourist Information Centre close to the centre of Welshpool, a bustling market town on the border with England. The beautiful terrain is hilly, with one or two severe climbs and a lot of smallish ones, some of them steep! So long as you don’t get lost, you shouldn’t see much traffic of any sort for most of the time, even on the short stretches of A roads you encounter. Finding somewhere to eat on the way is problematic, so you would be advised to take a picnic, or at least some energy bars and plenty to drink. 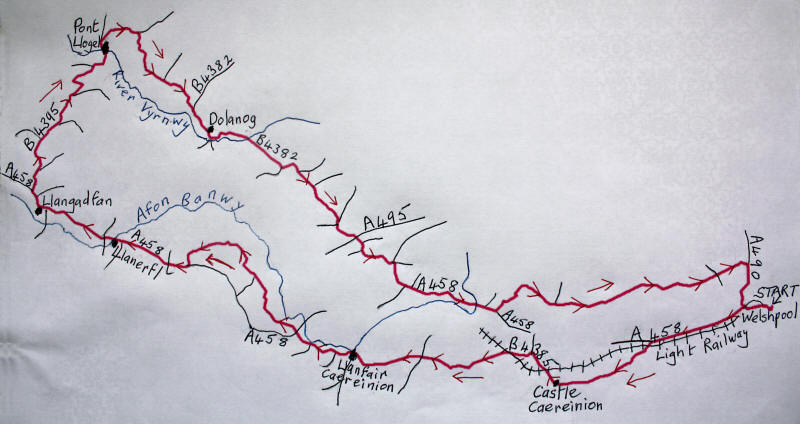 00.7 Right at Traffic Lights, and follow the A 458 signposted for Dolgellau.

On your way out of the town you will negotiate a roundabout, next to which is Raven Square, the station for the start of the Welshpool and Llanfair Light Railway. This 2ft 6"gauge track was opened in 1903 to assist local businesses with the transport of their supplies and products to and from Welshpool and the main line trains there. From the beginning it was built on nothing but faith, hope and charity, and never had a cat in hell’s chance of being commercially viable. Surprisingly, it lasted until 1956 when the line was finally closed by British Railways.

At this time there were already moves afoot to restore the line to steam working, and in 1959 after tortuous negotiations with BR, work began. Since then the line has gone from strength to strength, doing something that its predecessor never did-make a profit, though most of the work is done for free by an army of volunteers.

More information about timetables, ticket prices and a history of the line can be found by typing “Welshpool and Llanfair Light Railway” into Google’s search box. Alternatively ring 01938 810 441. If you want to cut out some of the hills on this ride, you can take your bike on the train to Llanfair Caereinion, but check first to be sure there is room.

08.6 Left @ T-junction uphill by a Church in Llanfair Caereinion. (Effectively straight on as you join the road on abend)

10.5 Immediately before the junction, turn right taking the first of two exits onto the main road, and in 20 yards

Straight Over the A458

16.7 Right onto B4395 through Pont Llogel, signposted Llanfyllin.

There is a car park and picnic site on the right hand side immediately after crossing the bridge.

36.7 Straight Over @ roundabout into town centre.