The most westerly part of north Wales, the Lleyn peninsula, has its own special character and this rides explores some of the country lanes and beaches near the tip of the peninsula.

Start: free NT grassed parking area on the slopes of Mynydd Mawr (Grid Ref: 142254) or alternatively at the pay car park in Aberdaron village (Grid Ref: 172264). The National Trust area, two and a half miles from Aberdaron, is a spectacularly beautiful and tranquil spot to start the ride and is worth the ride even if starting from the village 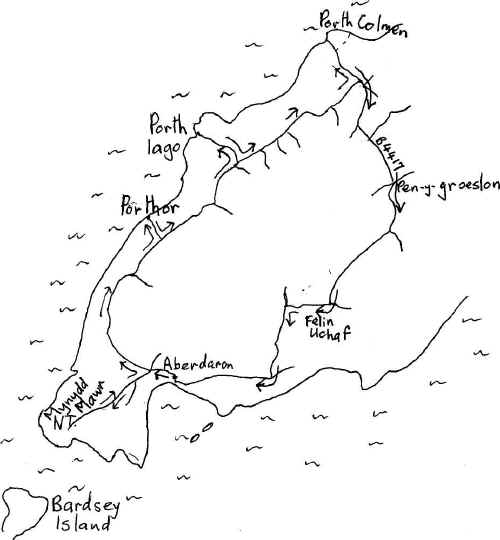 After visiting beach return to junction near barn and Turn Left

Return to junction near chapel and go straight ahead signposted Tudweiliog etc.

Go straight ahead at crossroads over B4413

Continue to Aberdaron and visit the beach

Climb west out of Aberdaron on coast road

Bardsey Island or Ynys Enlli in Welsh (Island of tides or Island of the great current) is 2 miles long and rises 548 feet above sea level and is situated off the furthest north western tip of Wales.  In the early middle ages it was an important centre of pilgrimage and 2000 pilgrims are reputedly buried there, as well as, according to some legends, King Arthur and Merlin. It has a striking profile and one feels an atmospheric sense of remoteness when viewing it from the lovely, open National Trust coastal property at the start of the ride.

Its English name derives from the fact that, because of its texture, the sand makes a squeaking or whistling sound when you walk on it. It is popular beach in a long, sheltered cove. A cafe is open during the holiday season.

Porth Iago is a striking, south facing narrow inlet with a small but magnificent beach and steep cliffs. It is approached along a rough track through a farm and there is a charge of 50p for cyclists.

Aberdaron is small, white-washed village with an attractive beach that is popular with sun seekers and water sports enthusiasts. It has a small 16th century stone bridge. St. Hywyn's is a fine old church stunningly situated, overlooking the bay. The poet R.S. Thomas was vicar there.