Rough Stuffing in the 1940s 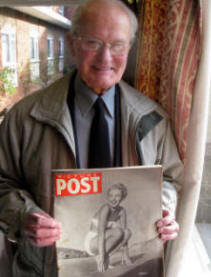 The Picture Post was a pioneer of photojournalism in the UK. It appeared between 1938 and 1957, and within two months of its first copy achieved a circulation approaching 2 million copies a week. Its pages witnessed the horrors of the war years and the country's slow return to peacetime was reflected in the pictures and stories savoured by its readership.

At a family reception following the funeral in January 2012 of Jim Skelding, a past president of the Chester & North Wales District Association of the Cyclists Touring Club, Trevor Hargreave, a long standing CTC member, produced a copy of the Picture Post featuring the DA in 1949. Both Jim and his late brother Bill were pivotal members of the DA when it was formed as war broke out in 1939. After war service, both returned to civilian life to help the DA rediscover its roots and flourish. But let the story speak for itself...