Roadside Debris and the Cyclist

Cyclists have much to complain about with the design of highways, and road maintenance in general. It is clear that those responsible have little experience of cycling - and appear to care even less about the problems cyclists face daily.

What to other road users (pedestrians and motorists alike) is of little consequence can spell discomfort or even danger to those travelling on two or three wheels under their own steam.

Just imagine a dark winter morning - cycling for the start of the 6am shift and hitting a path strewn with thorns. Such events are not uncommon. Few cyclists have not experienced the frustration of having to organise a road side repair due to someone else's carelessness - or even deliberate malice.

Below is a photo which speaks volumes. Small children on their bikes accompanying adults going for a walk on a recently constructed shared-use path between Dyserth and Rhuddlan, Denbighshire.

But this email was received from Claire Cunnah shortly afterwards

'We were very pleased to have our photo taken on the cycle path but within 3 mins after this photo, due to flailed hedges and hawthorn, ALL of our bikes had several punctures. The children were very disappointed but we continued on our walk enjoying the pleasant weather. What a shame Denbighshire CC didn't sweep up after themselves. Please can they clear the cycle path or we won't be able to use them.'

Note what the law says on this matter: 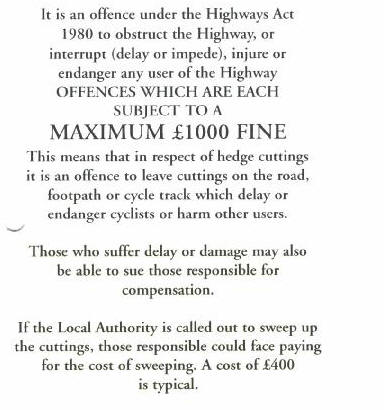