Quiet Country Lanes - A Legacy for the Future?

In the days following the Rhyl Cycling Club tragedy there has been an unprecedented feeling that things have got to change as far as the 45,000 killed and seriously injured each year on the roads of the UK are concerned. For some days afterwards cyclists reported a palpable improvement in the conduct of motorists towards them and that they were given a far wider berth on the road. Surely this proves that motorist behaviour can change.

During the funeral of one of the four club members who were killed, Chairman Maurice Broadbent, the Vicar of Abergele, Rev. Shirley Griffiths, drew a parallel between this, the worst cycling tragedy in British history, and the rail disaster in 1869, when 33 people died after cargo trucks collided with a Holyhead bound train at Abergele. That event led to major changes in railway safety procedures. She felt just as that was a defining moment in British history for railways, so the loss of the cyclists should also be a defining moment in history for cycling. Many are determined that this will be so and lessons must be learned.

As a tribute to the Rhyl Cycling Club, CTC Cymru, the Welsh region of the 60,000 member cycling organisation, would like to see the area bordered by Dyserth, Rhuddlan, Pont Dafydd, Rhuallt, and Cwm in Denbighshire, declared a 'Quiet Lanes Zone'. These are the first true 'country lanes' that Rhyl Cycling Club members encounter as they set off on their rides into the Vale of Clwyd. It is expected this proposal will receive wide support from other voluntary and countryside bodies. If you would like your organisation to be associated with this cause, please contact the website editor by email. His address is to be found on the Home Page

What are Quiet Lanes?

They are networks of minor rural roads that are appropriate for shared use by walkers, cyclists, horse riders and motor vehicles. 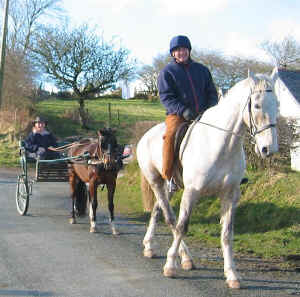 These roads should already have low traffic flows travelling at slow speeds. The development of Quiet Lanes schemes involves actions such as the following:

The aim of Quiet Lanes is to maintain the character of minor rural roads by seeking to contain rising traffic growth. The concept is not intended as a device to traffic calm busy roads or to tackle rat-running or HGVs in rural areas. The concept is aimed at identifying networks of minor rural roads and is not solely about solving problems on individual roads. Roadside verges and public rights of ways must also be considered.

A number of authorities have already developed Quiet Lanes as pilot schemes.