MEMORIES OF THE 1978 CTC CENTENARY

As every student of cycling history knows, the roots of CTC go back to 1878. During its centenary year there were many celebrations including a 1300 mile continuous day/night Relay Ride around England, Scotland, Wales, and Ireland. Four hundred and seventy three riders representing all District Associations took part, with a back-up team of eleven. Five riders set off from CTC Headquarters, including staff member Nicholas Crane who has since gained TV fame as 'Map Man' and for his TV journey around the UK coastline.

Between the North Wales town of Bala and the Scottish port of Stranraer the route split into two. The first went by way of Holyhead to Dublin, and then north to the Irish port of Larne. The second went via the North of England to Galloway, and was then reunited with the Irish leg at Stranraer. The ride took five days and finished at the Home Park, Windsor. A creditable 23 riders from the Chester & North Wales District Association played a part in handing the baton over to the Dublin or Merseyside District Associations.

Within the DA's many in-house events were organised. In Sheffield an approach was made to the Sheffield Wildlife Trust and Sheffield City Council with a request to plant a centenary tree to mark 100 years of the club's existence. A young mountain ash tree and commemorative stone were placed just within the Peak District Park boundary.

Regrettably the stone was later vandalised and the steel winged wheel and inscription plaque stolen. The years passed by and the majority of those involved either moved on or died.

Two years ago Tony Gore read about the Centenary tree in a cycling book, and one summer's evening in 2005 a dozen of local members set off to search for the memorial stone and tree. The area was wild and overgrown and several commemorative stones were discovered, all neglected, but none relating to the CTC.

Not to be out-done an older member was sought out and consulted. He had been involved in the project at the time and had also been employed by the local authority. No problem. He was able to take the team back to the exact location. The mountain ash was fully grown and surrounded by other trees. The stone had the appearance of a neglected Victorian tomb stone with 'CTC 1878 -1978' barely visible.

A stone mason was engaged to carry out the renovation work, and a small local company produced a Sheffield Stainless Steel CTC Winged Wheel. This was to be bolted to the stone, together with a commemorative plate in the same steel. The ground around the site was cleared of bracken, and trees pruned to allow more space for the mountain ash

On 1st October 06 CTC President Phil Liggett, CTC Director Kevin Mayne, and CTC Chairperson, Jill Keiran, were invited to Sheffield, along with sixty other members. Four separate rides were organised, all finishing at the tree and stone at 14:00hrs, where President Phil performed a re-dedication of the memorial. The assembled guests then cycled a mile to Dore village hall for a reception, and an an exhibition on the history of the memorial site, the local DA, and the Sheffield and Doncaster sections. Phil was presented with a silver plated paper knife - made in Sheffield of course.

Sheffield's Tribute to a Special Event in Cycling History 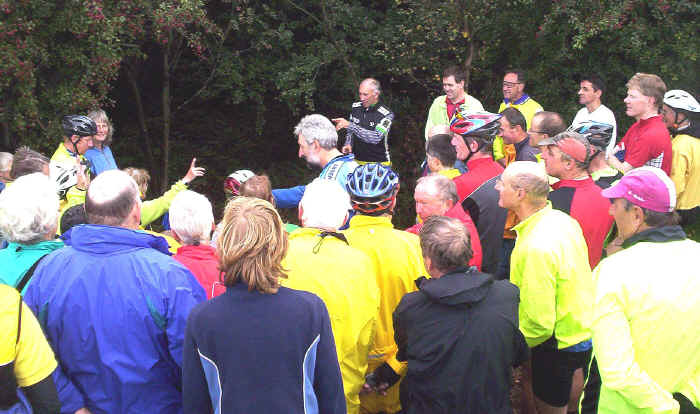 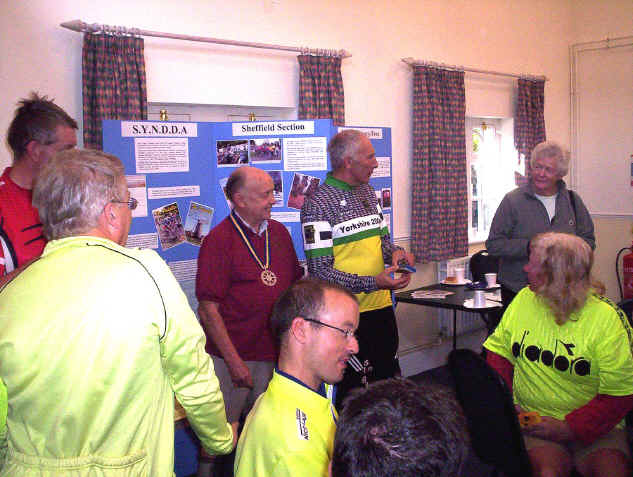