Launch of 'On Yer Bike' and new Cycle Bus service

Two local government initiatives have taken off within the past few days aimed at getting folk onto their bikes and into the countryside.

The popular tabloid sized freebie, ON YER BIKE, has made a reappearance after a three year interval. Available from bike shops, libraries, and information centres, it contains a variety of cycle routes in Denbighshire, Flintshire, and Wrexham. Brightly coloured with all the right health messages inside, its spirited front cover collage contains a number of CTC Cymru images.

Well done to the three counties involved, and this includes the advertisers who have made it possible for the general public to have a real bargain for free.

Also launched at Prestatyn on the 30th June was the new Clwydian Ranger Bus Service, which includes the provision of two bike racks on some routes. Again the same three North Wales counties have been involved in this initiative, but joined by Mersey Rail in bringing visitors from Merseyside. For further information telephone 0870 608 2608

Both are thoroughly worthwhile enterprises, not least of all in encouraging us to leave our cars at home when we go for a trip into the countryside. Much credit is also due to the Ramblers' Association for their hard work in helping to get the new bus service off the ground.

At the launch of the bus, Rhodri Morgan First Minister of the Welsh National Assembly spoke warmly of the Vale of Clwyd , and of how it should be more widely promoted. Cllr Meirion Matthews spoke for Flintshire, and Cllr Tom Parry for Denbighshire.

Representing cycling, Roy Spilsbury, CTC Cymru, referred to the increasing number of people wishing to cycle, and of the business 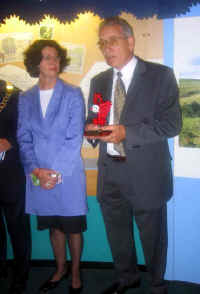 opportunities these represented in an area dependant on tourism for it's prosperity.

Cllr Mike German, Denbighshire's Lead Member for Sustainable Development and the Environment, expressed pleasure at having been to Cardiff Castle to receive, on behalf of the two counties, the 2003 National Transport Award for Wales for Promoting Cycling and Walking.