The lesson of Rhyl CC & Abergele must be learned

An attempt was made by the Safer Streets Coalition, a group of 28 member organisations including CTC, Road Peace and Living Streets, to have an amendment relating to 'Driver No Blame Liability' inserted in the Road Safety Bill during its passage through the House of Lords. Lord Berkeley sought to move the amendment. Lord Davies of Oldham rejected it on behalf of the government. The debate as recorded in Hansard may be seen below.

In the case of the driver whose misjudgement of road conditions led to the deaths of four Rhyl cyclists, he was charged only with having tyres below the legal standard, and was not held in any court of law to be responsible for the appalling consequences.

In the context of the riposte by Lord Davies representing the government in the House of Lords (Hansard highlighted below) in responding to Lord Berkeley, the driver in this case would be considered 'innocent'. How then would Lord Davies define the Rhyl Cycling Club victims - reckless? And reckless for being cyclists? And at fault for being in the wrong place at the wrong time?

These families are no doubt still seeking peace of mind in a society that does not recognise the need to protect vulnerable road users from the consequences of driver misjudgement. The final remarks by Lord Berkeley speak for themselves.

Lord Berkeley said: The amendment concerns driver liability in collisions with more vulnerable road users. It is pretty obvious to say this, but if a motor vehicle hits a pedestrian, a cyclist, an equestrian or a disabled person the non-motorised user is much more likely to be injured than the driver. As I said earlier today, the figures are something like you are on average 18 times more likely to be injured if you are not in the vehicle.

It ought to mean that drivers have a greater duty of care for non-motorised users and their safety. But this is not currently recognised in law. The current civil liability system requires negligence to be proven, which is of course often impossible for pedestrians and cyclists when they have been killed or injured.

My argument is that the law on driver insurance schemes should be amended so that non-motorised road users will be able to claim injury damages from drivers who hit them unless it can be shown that the non-motorised road user behaved recklessly. In deciding this, the person's mental and physical ability should be taken into account so that groups such as children and people with learning difficulties and disabilities would normally obtain damages in any event. Drivers would not, however, be criminalised under these proposals. These proposals are in line with laws already in place in other European countries.

Every month or two I take my bicycle to Paris or Brussels on business and I pedal around the cities. I know that you must keep to the right; I can cope with

that. My impression is that it is much safer to ride a cycle in those cities than it is in London, where I am used to cycling. Drivers give cyclists more space and give way to them when they have the right of way. I have talked to quite a few cycling groups about the matter, and I am persuaded that the reason for the difference is that drivers in those countries understand that they will be seen to be guilty if they hit a cyclist or pedestrian while driving without due care.

It will be interesting to hear what my noble friend says, as the amendment would make a major contribution to redressing the balance between the road user in a motorised vehicle and others such as pedestrians and cyclists, who have an equal right to use the road. I beg to move.

Baroness Masham of Ilton: Does the noble Lord's amendment include somebody riding a horse or pony along the road? I must declare an interest, as I have a small rural riding centre, and we are always worried about people driving carelessly and too fast along country lanes.

Lord Berkeley: I am grateful to the noble Baroness. I said that the amendment would include pedestrians, cyclists, equestrians or disabled persons; in other words, any road user. I imagine that it includes anyone riding any other kind of animal, or perhaps driving a herd of cows or sheep—basically, anything that is not motorised.

Lord Davies of Oldham: Of course I share the concerns about vulnerable road users. We insist that motorists have third-party insurance in order to make necessary recompense when they are at fault in an accident, but I cannot see how my noble friend can argue that an innocent motorist should be liable. That seems to destroy the concept on which our law is founded.

Furthermore, I am not sure that the amendment would encourage road safety. The likelihood is that it would encourage greater recklessness on the part of those who could never in any circumstances be found at fault because they are defined by my noble friend as the innocent party. Instead of the courts being able to look at the incident, take account of all the factors concerned and reach a judgment, a judgment would already have been made against the motorist, in any circumstances, in favour of the other party. I do not think that that is tenable.

Lord Berkeley: I am grateful for my noble friend's response. The concept of the innocent motorist rather depends on how fast the driver was travelling and whether he was taking due care of the other people on the road. It is interesting that the approach seems to work perfectly well on the Continent. My noble friend did not respond to that. There is no great outcry on the Continent because motorists are proved guilty before they can even protest their innocence. I shall reflect on what my noble friend says. I beg leave to withdraw the amendment. 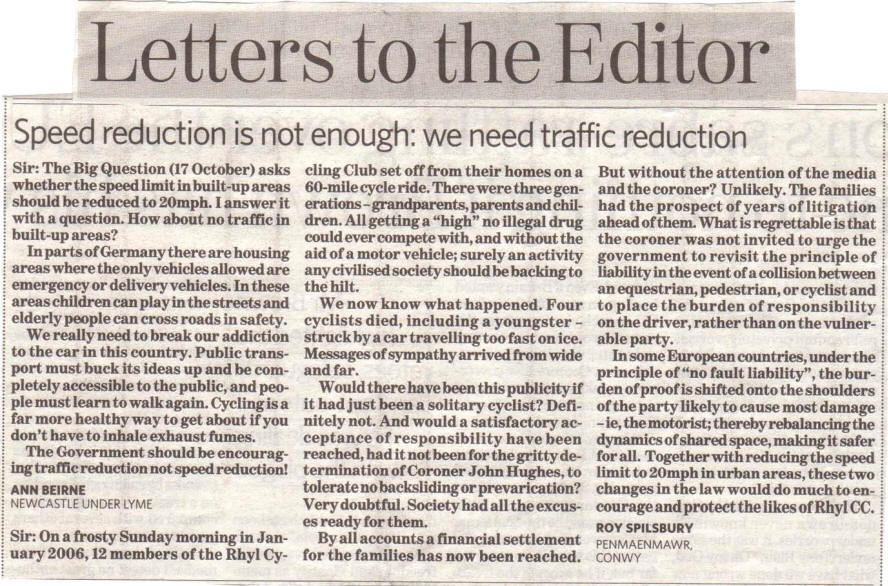