Recovering from injury and lifestyle - a remarkable story

Don Hale, investigative journalist and novelist, has just returned to cycling on medical advice after breaking a leg several weeks ago. Of his move to Rhos on Sea from Derbyshire last October he says:

"Living in landlocked Derbyshire, my wife and I both missed the sea and we love the Llandudno region. We saw it as an opportunity to develop a much needed healthier lifestyle.

"I was unfit and overweight, however, and since arriving in North Wales my enthusiasm to recapture my lost youth must have got the better of me and I snapped a bone in my leg whilst out for a run. The accident also damaged my calf muscle and put me out of action for many weeks. After 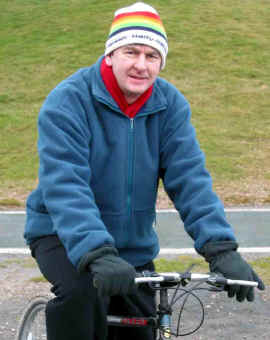 taking medical advice, I decided the best way to re-build my fitness, and keep the weight off my leg whilst recovering, was to ride a bike. The promenade at Rhos on Sea has proved ideal. It is relatively flat and has a purpose built track that stretches for miles along the scenic coastline."

In his younger days Don was a professional footballer and played for several league clubs. He then became a journalist, rising to become the editor of the Matlock Mercury in Derbyshire. Always very active, he enjoyed keeping fit by taking part in regular fun runs, cross country and marathon events.

However he was to become involved in a prolonged campaign of investigative journalism almost without parallel in this country. His dogged determination to see justice done led to the release of Stephen Downing from prison after serving 27 years for a murder he didn't commit. Awards that he has received include Journalist of the Year 2000, International Freedom of the Press Award presented by Tony Blair and an O.B.E. presented by Prince Charles.

After 30 years in journalism Don decided he needed a complete change of lifestyle and career. In 2001 he left his day job to become a full time writer and is  the author of several books about true crime and wartime investigations - and to begin work on a new Welsh detective series.

"It was also good to get the bike out of the garage again. We actually bought the bikes 6 years ago with a similar intention to get fit, but they have hardly been used. This injury provided me with the perfect opportunity to get them serviced and make use of the local terrain.

"Regrettably, I soon found a few other muscles that had not been exercised for years, but I am persevering and have found cycling a very pleasurable experience. Like running, it is an activity that can be completed on your own or with a group, and at any time of the day or night with very little cost and inconvenience.

"It has also brought back many happy childhood memories of cycle rides in this region and I celebrate the fact that most cyclists always seem to be a very friendly bunch. There's a genuine camaraderie with a ready smile, wave or cheery greeting. I am looking forward to continuing with my fitness programme and hope to meet many other born-again cyclists on my travels. I just hope that sometime soon I might also meet the inventor of a softer saddle!

See you and your wife up the road!

Footnote: In 2004 BBC 1 showed a two part drama entitled 'In Denial of Murder'. This was based on Don's part in the release of Stephen Downing from a term of Life Imprisonment.

CTC Cymru is pleased that this page has been used by the Berlin publisher Cornelsen in the production of an English language refresher course for the German market.