Derek more or less gave up cycling in the late 80s when his children lost interest and he had a couple of tumbles from his bike - fortunately nothing serious. In 1993 he had a career change to a sedentary occupation and gained a lot of weight. About three years later he began to feel unwell and in 2001 was diagnosed with diabetes Type 2.

Derek quickly progressed to an insulin regime. This failed to control his condition. Faced with the daunting prospect of further deteriorating health, in 2007 he underwent a 'Roux en Y' gastric bypass operation. This resulted in a significant weight loss from 119 kg to 77 kg where it now seems to have stabilised.

Determined to achieve a higher level of all round fitness Derek took up circuit training, but found this repetitive and boring. He decided to return to cycling and bought himself a Claude Butler hybrid. However, when he found this gave him backache, he went to Paul Hewitt of Preston to have a frame built to his own specification and started cycle-touring.

Between late July and early November 2007 Derek covered about 1600 km, and progressed from using bed and breakfast accommodation to lightweight camping. He has now joined the Fell Club, and in a few weeks time is looking forward to his first club meet of 2008.

He is now on his bike most days of the week and aims to do a ride of at least 25-50 miles no less than once a week. He enjoys his cycling so much he hasn't driven his car since August 2007 - in fact he's about to sell it. For longer cycling trips he much prefers to take his bike by train. All in all he reports that not only is he feeling much fitter all round, but he has returned to a quality of muscle tone he hasn't known since the days of his youth. 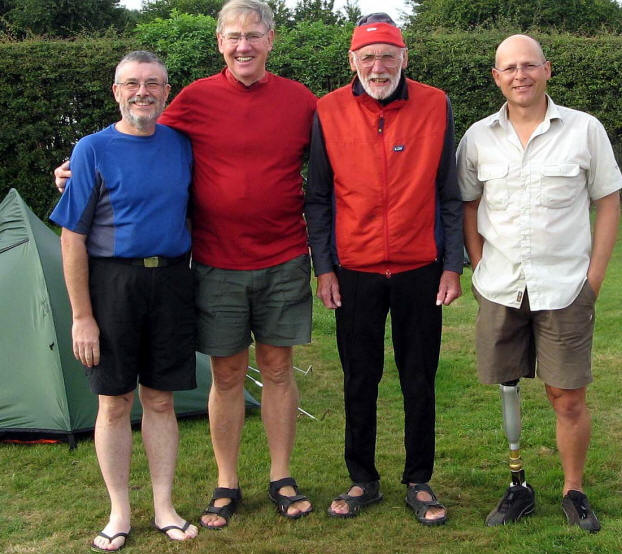 The picture above features Derek (far left) with Fell Club members. Derek is also a member of Stour Bicycle Users Group (BUG), Wolves on Wheels Cycle Campaign (Wolverhampton), and he is a CTC Right to Ride Representative. On the far right of the picture is Kevin Hickman, also a CTC Right to Ride Representative. In 2005 Kevin rode with the legendary Land End to John o' Groats quadriplegic hand-cyclist, David Abrutat. We hope to receive in due course more of Kevin's experience of overcoming disability.

Barry (75yrs - 2nd right) was told in 2001 that he had a leaking heart valve. This was replaced with a mechanical one at Bristol General Infirmary the following month. Prior to that Barry could manage only four stairs at a time with difficulty. After three months recovering from the operation he began to take daily walks. When these reached 8-9 miles non-stop, he decided to return to cycling.

Although having to take medication for the rest of his life, Barry enjoys good health. Over the past 4 years he has undertaken many long distance rides and continental tours. He now considers life a bonus. He believes that anyone who has undertaken surgery such as his should be able to lead an active life (if they have as much determination as Barry clearly has - Ed)