Cycling and the Railways

The latest edition of the CTC's magazine CYCLE reports that the Strategic Rail Authority (SRA) finally issued its consultation draft on cycling policy on 15th April - only five months late!

The document contains fine words but few commitments. In particular there is no specified aim to increase the number or proportion of passengers using cycles in combination with rail travel. The emphasis is on 'encouraging' operators to take action, rather then on setting basics standards. It is particularly weak on the issue of cycle carriage.

CTC is calling upon members and cyclists in general to respond to this consultation, and also to distribute information to fellow passengers they encounter on their travels. A template response to the consultation, and a leaflet for distribution to other passengers can be downloaded from  http://www.ctc.org.uk/working/bikerail.aspx

or call 0870 873 0060 (in the case of the leaflet, please indicate how many leaflets you require). There will be an information display on this and other transport issues at the York Rally (26-7 June) 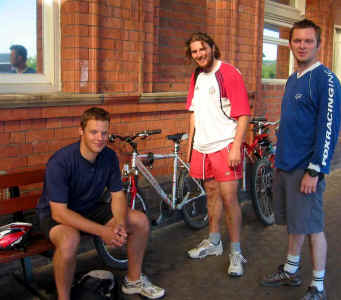 It happened late May 2004 in North Wales. These three students from Bangor University decided to have a day cycling in the Betws-y-Coed area. They considered the best way to get to their destination was by rail. By some means they managed to exceed the limit on the number of bicycles as far as Llandudno Junction, intending to take the single line service to Betws-y-Coed. However they were refused permission to board, although the train was almost empty of other passengers. Instead they spent the day on Conwy mountain. We see them here at Llandudno Junction station hoping to repeat their trick of returning to Bangor as a party.

Editors note:- At a time when the Government is preaching integrated transport, it is quite unacceptable that taking a bicycle by train should be such a lottery. There are many who would choose to use a bicycle in conjunction with rail - if they could guarantee a smooth journey free of such inconvenience and humiliation.

Richard Morgan (far right in photo) reports that he and his friends managed to return to Bangor without serious problem - the train was a big intercity type. However they did have to move a few suitcases from the cycle storage area, with a few disgruntled looks from owners of the said luggage!

Since then Richard has taken his mountain bike home to Somerset by train without a hitch, although he was a single passenger then. Around Bristol it appeared to him that more cycle carriages were being laid on. He saw lots of bikes being taken on and off the trains . Richard sends us his greetings and ask CTC to keep up the good work on behalf of all cyclists wishing to incorporate the bicycle in long cross country journeys