In the pre-WW2 years Frank J Urry was a popular columnist in the CTC Gazette, the journal of the Cyclists' Touring Club. Who can deny that Frank, and his contemporaries of a similar mind, had a gift for chillingly accurate vision? Yes, we have absorbed traffic into our cities during the seventy years that have elapsed since, but at what hidden costs? Judge what Frank had to say, and ask yourself, was he really that much off the mark?

On the same theme we also include a cartoon which appeared in the Gazette that same year by kind permission of the Northampton Chronicle and Echo.

The Cause of Congestion

In the June issue of Chambers Journal, Mr Henry Leach gave its readers a very interesting essay on the traffic future of London city, and I can see the ardent motorist squirming sneeringly as he reads it, and devoutly wishing that he could argue the question with the author. In effect, Mr Leach suggests that the popular use of the private car in our city streets is rapidly defeating its greatest economy of travel, the saving of time. If the popularity of the motor car during the next five years approaches the numerical advance in the use of that vehicle during the last five years, then the problem of congestion in the city will be impossible of solution outside the closing of the city and town areas to motor traffic, with the possible exception of a few special permits. It is a thought that must have occurred to many people as I have heard it often, particularly from those held up in a traffic block, and seem incapable of realising that he and his kind are the main cause of the hold-up.

But in Mr Leach's article for the first time I have seen the thought carefully expounded in print, and reasons adduced why the popularity of the car is destroying its value as a saver of time. The writer of this essay (Urry) gives his own experiences and the results of his observances, and they are very illuminating.

With a young friend of mine I counted a hundred cars proceeding to town one morning just after the Christmas holidays, and eighty seven of them were in the sole occupation of the driver. This stream passed us at the rate of over ten cars a minute, for it was during the rush hours, and their speeds were of necessity exceedingly moderate. Many of those cars would occupy valuable space for the greater part of the day, waiting to take their owners home in the evening. Big towns are congested not by moving traffic so much as the stationary, and shop keepers in the city are complaining.

The idea of debarring motor cars from our big cities and towns is quite novel to many people who do not look beyond the vision of the moment. Indeed, I imagine most car owners would feel highly injured at the bare mention of the matter, yet they would agree to bar all forms of traffic. But even supposing that to be possible, it would not cure the problem of congestion, because that is almost wholly motor created. Nor can we widen our town and city roads to accommodate the ever increasing stream of motor cars, because the process is far too costly, and even if that could be overcome, time is a terrible factor, for the numbers would increase faster than the streets could be made to accommodate them ……. and it may be that the bicycle will be recognised as the most useful of all travel vehicles for the city and town trotters.

Great car parks could exist on the verges of restricted areas, and our cities and towns would take to themselves a quieter and more comfortable character, with space to breathe and move and to do our shopping without the rush and bustle that now pervades the community, consequent upon the fear that authority may be waiting to present a summons, because a car has overstayed its allotted span. Today, with motoring tempers already over-burdened with fancied restrictions, the idea may seem like a dream, possibly a bad dream, but the fact remains that town traffic has become a nightmare. What will be the next five years hence unless Mr Leach's proposals are adopted? 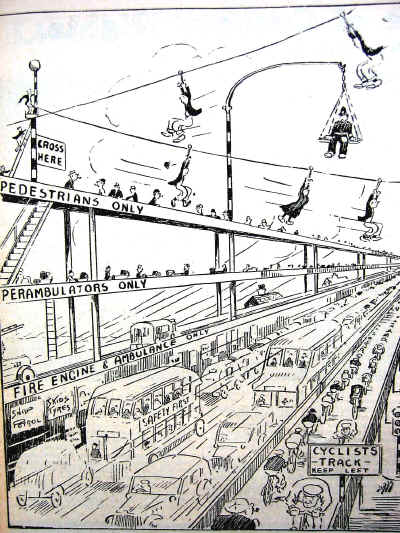