Britain ‘in love with speed cameras’

PEOPLE all over the country are crying out to have cameras in their community, a new survey shows. Transport 2000 has calculated that nationally there could be as many as 10,000 requests a year from local communities for speed cameras. However, many communities around the country are being refused a camera because not enough serious crashes have happened.

Transport 2000 is calling for revisions to the national speed camera guidelines so that cameras can be placed at sites where there is either a crash history or genuine local community demand where a problem of speeding is demonstrated. 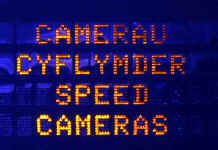 The figure of 10,000 requests per annum could in fact be an under-estimate, as there is no formal requirement for the Safety Camera Partnerships to monitor or log community demand. In addition, many requests for cameras are ‘lost’ as they go to agencies other than the partnerships. Calls for cameras come from individuals, community groups and parish councils.

Safety Camera Partnerships are often constrained in how they respond to community requests because of restrictive guidelines set out by the Department for Transport. The guidelines say that fixed cameras can only be placed where there have been four fatal or serious accidents, or two for mobile enforcement. While the guidelines allow for 15 per cent of camera enforcement at community concern sites, some partnerships are not using this discretion and others find that it is not enough to meet local demand.

Julia Samson, Transport 2000’s Streets for People Co-ordinator, said: “Recent debate has focused on how cameras should only be placed at accident black-spots, but our research shows that there are thousands of communities demanding speed cameras. In short, Britain is in love with speed cameras, not against them as motoring organisations would have us believe.

“It is unacceptable that local communities should have to wait until people are killed before their demands are met. The Safety Camera Partnerships are doing a good job in difficult circumstances, but when a community comes to them requesting a speed camera, often their hands are tied because of the restrictive guidelines on where cameras can be placed.”

In response to the findings, Transport 2000 is calling for:

•Revisions to the speed camera guidelines so that cameras can be placed at sites with either a crash history or genuine local community demand where a problem of speeding is demonstrated.

•A requirement that partnerships should monitor community demand for speed cameras and other speed management measures.

•Promotion of good practice between local partnerships particularly in the areas of community liaison and public education work.

These findings reinforce the message from numerous opinion polls that continue to show that the public, including motorists, back the use of speed cameras. A ‘poll of polls’ conducted by Transport 2000 last year showed an average of 74 per cent support for cameras.

Transport 2000’s Streets for People Network is in touch with many groups using imaginative ways to try to slow down motorists in their communities. Some communities have resorted to placing fake cameras in villages and even using life-size cardboard cut-outs of police with hand-held cameras at the entrances to their villages. The Community Speed Watch initiative – where communities are trained by the police to use hand-held speed guns – is being implemented in a growing number of areas.

MPs have been lobbying for more cameras. Helen Jackson MP, a member of the Commons Transport Select Committee, said: “The evidence that speed cameras work by reducing accidents is unequivocal. After our huge campaign locally and in Parliament, new cameras were put in place on the A616 Stockbridge Bypass in South Yorkshire. These cameras are very popular, and speed and accidents have dramatically reduced. I have a lot of sympathy for communities who suffer from speeding motorists but are told they must wait until four people die before something is done.”

Derek Butlin, Chairman of the Gnosall and Haughton A518 Action Group in Staffordshire, said: “We are absolutely desperate to have cameras in our two villages. All the evidence shows that cameras are the most effective way of reducing speed on through roads, but because not enough crashes have yet occurred, we are not eligible for a camera.”

Mrs V Worrell, a smallholder who lives on the A619 near Baslow in Derbyshire, said: “We would love a fixed camera, but not enough people have been killed or seriously injured for us to qualify for one. There is a 60mph limit outside our house, and traffic comes off the motorway at 80mph, making our lives a misery. Our gates and walls have been smashed down, and in a recent crash here, my son-in-law was nearly killed. If I was allowed to, I’d pay for a speed camera myself.”

(2) The e-mail/telephone survey was carried out in February 2004. Transport 2000 had contact with 31 of the 43 Safety Camera Partnerships. On average, they reported 20.57 requests per month. Some reported a handful of requests while others reported 50 or 60 or more. Across the UK, this indicates as many as 10,000 requests per year. Transport 2000 believes this figure to be an under estimate, because there is no requirement to monitor, and many requests are going to agencies – such as the police and local authorities – other than the partnerships polled.

(3) Department for Transport evidence shows that on average the number of people killed and seriously injured has fallen by 35 per cent at camera sites. Speed is the biggest factor in road collisions, and is thought to contribute to at least one third of fatal crashes.

(4) Transport 2000 is an ‘umbrella’ group representing the transport views of more than 40 environmental and transport organisations. Formed in 1973, it seeks sustainable solutions to transport problems, solutions that revolve around the use of public transport, walking and cycling.