The late Bob Clift's name is synonymous with the Cheshire Cycleway. For some years there has been an annual ride in his memory. For those who never had the pleasure of knowing Bob personally, here's an opportunity to put a face to a name and know a little more of his rich life and times as a cyclist.

When he married in 1961, Bob Clift and his wife made their home in Upton. He came from an army background, his father served in the Coldstream Guards for 34 years, several of those as R.S.M. at Chester Castle so it was natural for Bob and two of his three brothers to join the same regiment. He was able to draw on this background in the various activities he became involved in.

Bob helped with the Marine Cadet Corps in Chester as well as the fund raising, and opening, of the Youth Club in Wealstone Lane. He also organised the local Scout Jumble Sales for some time: this was hard work, but with dedicated helpers it was always a good money raiser for the Scouts. 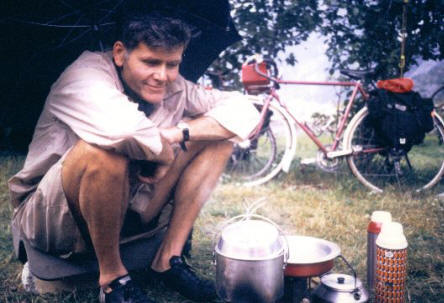 The Clift family were well known in the area for their cycling activities and many young people were introduced to cycle touring and hostelling through Bob’s enthusiasm. He was called upon to appear on the North West Tonight television programme for an item on the dangers of cycling in certain parts of Chester. As Bob had cycled back and forth to work at Ellesmere Port for 32 years, only being prevented by weather on one occasion, he was interviewed by Radio Merseyside, who gave him the title of ‘Cyclist Extraordinaire’. Bob thought this was amusing; but did feel be must hold the title for having cycled the most times up Moston Hill.

In 1983 Cheshire County Council asked if he would devise a ‘Cheshire Cycleway’ route. In due course, after covering many miles by bicycle, he marked out the route. This started just outside Chester and continued for 100 miles through quiet lanes (crossing a number of main roads) to Macclesfield. Cheshire County Council, with a few minor changes, adopted the route and signposted it. Bob also devised a reliability ride based on this route which attracted over 200 entries each year. Sadly, Bob died at the age of 56 following a short illness, but his legacy will live on. The reliability ride is named after him (the Bob Clift Memorial Ride, held annually) and still attracts many entries.

In 1990 Cheshire County Council extended the route with an option through Ellesmere Port and Neston. At a re-launch event at Tatton Park a presentation was made to Bob’s wife Dorothy. It was inscribed Cheshire Cycleway in memory of Bob Clift, and was a fitting tribute.

A year before he died, Bob planted daffodils in various places in Upton and every spring they appear, giving visual pleasure to Upton residents.

And if you are ever near Betws y Coed, why not linger awhile on the seat dedicated to Bob in the grounds of the famous 'Ugly House'.