One year ago, almost to the week, a ride was held in the Vale of Clwyd, as a token of respect for the four members of Rhyl Cycling Club who died in collision with a car. That ride was outstandingly well supported by the Birkenhead North End Cycling Club. Sadly that club has now experienced its own tragedy, with the loss of one of its most popular members Mel Vasey, and the serious injury of another rider, Danny McDonough. A car hit them from behind.

The following is a report from the WIRRAL GLOBE, to whom we extend our sincerest thanks

TRIBUTES have poured in from a cycling community in shock after a well-known rider was killed on Sunday (14th January 2007) Mel Vasey, a member of the Birkenhead North End Cycling Club, died after he was thrown from the bonnet of a car in a horrific crash during a routine club bike ride.

The 53-year-old from Bebington was cycling along Parkgate Road near the A540 Chester High Road, when a silver Renault Clio collided with the group just after 9am.

The 24 members of the club were riding in smaller groups and had set off from popular meeting place The Eureka Cafe at Two Mills.

The area is known locally as a mecca for cyclists from Merseyside, Cheshire and North Wales, and Mr Vasey and his group were travelling down the southbound carriageway when the horrific accident took place.

The 29-year-old Clio driver from Wirral, who shunted into the group, was arrested for causing death by dangerous driving, and has been released on police bail pending further enquiries.

Left shocked by a good friend's untimely death, emotional tributes have rolled in for a 'happy and loving' man.

Cyclist Dave Parry witnessed the tragic accident and suffered minor injuries in the crash. He said: "Mel, who I knew both as a cyclist and through work, was a joy to know. He was a happy family man and he loved being on his bike. He organised the club weekends for a number of years, usually to Ironbridge, and everyone who knew Mel respected him for his determination to overcome setbacks, and for his really infectious humour."

And club secretary Andrew Templeman said: "Mel was a good humoured man always ready to share his time with other people. His joking nature meant he was the one who came along on our Christmas lunch ride with a Santa outfit. His selfless side meant he was the one who organised the club's Youth Hostelling weekend for the last few years. If anybody ever had any difficulty whilst out on a ride Mel would be the first to assist. Whenever he saw an opportunity to make people laugh, he took it."

He added: "He was well known and liked amongst the North West cycling community and will be sadly missed by many."

Fellow rider Geoff Brandt described Mel as a 'lovely, helpful and popular guy,' and said: "Mel's family and the club have lost a real stalwart through a moment of one driver's inattention. I hope that the publicity may result in improvements to the A540 which is used by hundreds of cyclists every week."

The Birkenhead North End Cycling Club was set up in 1901 and is the oldest continuously-running cycling club on Wirral with over 100 members. A message posted on the club's website read: "Our thoughts and prayers are with Mel's family at this tragic time." Click here for a video tribute to Mel on the club's excellent website and for details of its campaign for a safer A540.

Cheshire Police are appealing for any witnesses to contact Const Rupert Venables on 01244 613168. 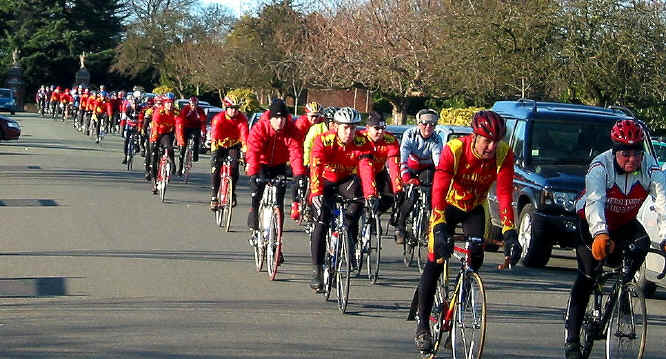 Almost 100 riders escorted Mel Vasey on his last journey to Landican Crematorium,  Tuesday 23rd January 2007. The chapel was filled to capacity, with the minister barely finding space for herself.

Moving tributes were read of a man who had so many friends and was not prone ever to say unkind words about anyone. He was a devoted husband, father, and grandfather, possessing a rich and infectious scouse humour: for many his passing will leave a space impossible to fill.

Apart from the Birkenhead North End Cycling Club, other organisations represented included, Rhyl CC, Merseyside Cycling Campaign, CTC and CTC Cymru. (If any other bodies were present, do let the editor know, we'll be pleased to give them a mention)

CTC extends its sincerest sympathies to all concerned, and will continue to campaign against the complacency that accompanies the annual toll on British roads of 45,000 killed or seriously injured.

CLICK for details of the 'Cyclists Defence Fund', the independent charity founded by CTC.