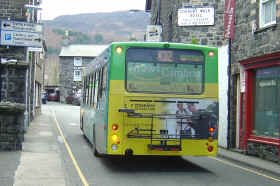 Arriva North West and Wales, in partnership with the Welsh Assembly Government, is introducing new buses onto the X32 (Aberystwyth to Bangor) service - part of the Traws Cambria network.

The five new vehicles, which have been fully funded by the Welsh Assembly Government, feature low floor easy access, improved coach style seating, and CCTV to give customers an enhanced sense of security. And for the first time, all buses have exterior bicycle racks helping local people and tourists make the most of the beautiful countryside.

Arriva will also soon take delivery of a further five buses for the X94 Wrexham to Barmouth service. The X40 service will also soon be running two bike buses.

The Snowdon Sherpa S2 service also has provision for carrying bikes. Wales now has a number of bike buses that will take cyclists up into the hills - from where it's a long freewheel down. The S2 Snowdon Sherpa service runs seven days a week from 4th April. Two buses carry bikes from Betws-y-Coed to Pen-y-Pass.

From 31st May the seasonal Clwyddian Ranger Sunday services start up with links to Rhyl, Bala, Barmouth, Corwen and Llangollen, and another high-spot The Horseshoe Pass, using four bike-carrying buses which run all-year, all week on Denbighshire's Vale Rider routes serving Wrexham, Ruthin, Mold, Denbigh and Prestatyn. All of which can save you some pedalling or, more significantly for local cyclists, cut out a long wait for a bus home when the service is only every 2 hours
There is a prospect also that the X94 and X22 Wrexham-Barmouth and Holyhead-Aberystwyth (general routes) will be bike carrying bus corridors.

Bike buses usually have a vinyl attached to the rear quarter panel explaining how to load a bike on to the rack.  In the case of rear racks the driver often has control of a locking mechanism to stop rapid unauthorised removal of bikes.

To find out more about services within the Traws Cambria network including times, fares, and rail connections please contact Traveline Cymru on 0871 200 22 33 (between 7am and 10pm daily) or www.traveline-cymru.org.uk