In 1929 a young cycling enthusiast from Liverpool died in mysterious circumstances in the Lake District.

Below is an account by Joyce Williams of the events surrounding this tragedy. It first appeared in Cycling World Magazine (http://www.cyclingworldmag.com/) whom we thank for their kind permission to share this sad story.

In 1929 the intermediate section of the Liverpool District Association of the Cyclists’ Touring Club was thriving with enthusiastic cyclists, both male and female. They had a very active social life and a good strong committee. On this committee in early 1929 was a young man named Thomas Henry Morris, 22 years old and known to his friends as Jack. He was the club secretary at that time and also wrote amusing articles in their magazine.

In “Winova’s” journal of April 1929 she described him as a popular young man, a keen rider in spite of lameness. Jack had a withered leg which necessitated him having to wear a leg iron. On strenuous runs which entailed a great deal of walking [the section always included rough stuff riding] he was always cheerful and patient, never being heard to complain. His sense of humour was unfailing, and those who knew him well would always remember his delightful wit, and whimsical sayings. He had a ready power of repartee that left an opponent with a distinct sense of being “sat on”. Therefore, in March of that year it was a great shock for the members of the DA to hear of his death in a lonely field in what was then known as Westmorland.

Jack had left for work on Tuesday, March 5th on his bicycle. When he did not arrive home later that day enquiries were made and it was found that he did not arrive at his place of work. His body was discovered by a farm labourer early on 8th March in a ploughed field on Harbourwain Rigg, near the little village of Crosby Ravensworth. His broken bicycle was found in a disused quarry 200 yards away from his body. Information received by the police at his home in Liverpool left little room for doubt that the body was that of the missing man. The body was reported to have a withered right leg which prevented him from walking without a leg iron.

He had been employed as a fine leather worker at the Liverpool Workshop for Cripples. A verdict of death by oxalic poisoning with no evidence to show the state of the man’s mind was returned by the Westmorland coroner at the inquest held at Harbourwain, Shap. A bottle of oxalic crystals which he would have used in his capacity as a leather worker was found on his person.

A postcard which he posted in Kendal on March 7th was received by a hotel-keeper in Denbigh, ordering lunch on the following Sunday for the members of his club. He had also been making plans for an Easter tour of the Lake District.

His family and friends knew of no reason as to why he should have taken his own life so the death has remained a mystery from that day to this.

In March 2008, while visiting old cycling friends who now live in Kendal, we decided to try and find the grave of Jack Morris. It was a really dreadful day and after visiting the Farmers’ Market in Orton we continued up the windswept roads to Crosby Ravensworth. We found the church and the four of us spread out to try and find the grave. Dorothy [whose father Stan Cooper, used to be the timekeeper for the Liverpool Century Road Club, in another era] was the one who discovered the grave, having spotted the CTC logo first. It was covered in moss and lichen and she ruined a good pair of gloves trying to fathom the writing. It was quite sad looking down on that grave and thinking of a young man, who for whatever reason had decided to take his own life.

There were snowdrops bobbing their white heads at the graveside and we wondered if they had been planted there by someone who once knew him all those years ago. It would have been nice to think that they had. A couple of pots with flowers in them lay near the grave so Dorothy picked them up and placed them near the headstone.

On our way over to the A6 we passed a footpath sign which pointed to Harbourwain Rigg so we knew that that must have been where he chose to end his life. Or did he? Was it some terrible mistake? What had taken him so far from home on his own to die in this way? He must have been in sound mind to have taken the trouble to post the card to a pub in North Wales.

If only my Aunt-in-law, Winifred Williams, had told me this tale years ago we might have found people still alive who could have shed some light on what might have happened. I only discovered the tale when going through her journals and newspaper cuttings of all those years ago.

We four of us were members of the CTC in the 1950s in Liverpool but had never heard the story. Dorothy and Bert were racing cyclists and Bert’s parents were active members of the DA in the same era as Jack Morris and “Winova”. They are mentioned in her journals as being very involved in the social side of the club and took part in many concert parties which were very popular in those days.

As we headed back for Kendal we realised that the date was the 8th March, 2008, seventy nine years to the day that poor Jack’s body was discovered. It sent a shiver down our spines.

A couple of weeks later Dorothy and Bert returned to Crosby Ravensworth from their home in Kendal and cleaned the headstone sufficiently to decipher the wording and the CTC badge at the top. Dorothy also placed a few bright primroses round the base of the headstone and generally tidied around. They then took a few photos including some of the church. I think they did a wonderful job both around the grave and the photographs they took. I’d like to think that “Jack” would have approved. I’m sure his family would have been very grateful.

They intend to return from time to time so that he is not forgotten. He lies in a secluded area not far from the church and we wondered if the spot was chosen by his family and friends or was it that there just happened to be a plot available for a stranger who chose, for whatever his reasons, to leave this world at the time and place that he did.

Maybe this article will prompt readers to visit him if they are in that area. He lived in an era when travel was not as readily available as today and maybe his family didn’t have the means to travel from Liverpool as often as they would have liked. 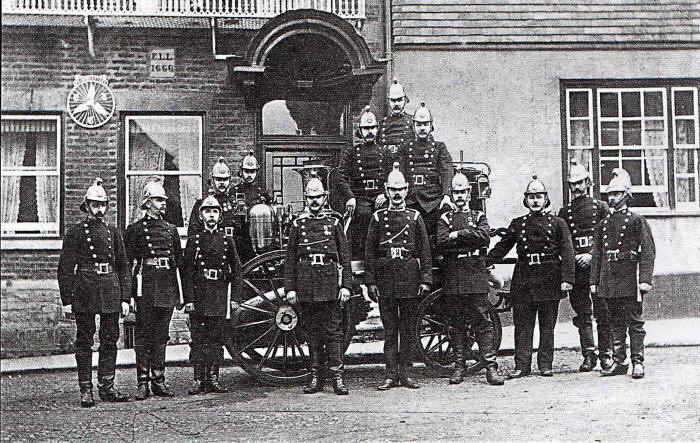 In all likelihood the postcard Jack Morris sent on the 7th March from Kendal, booking lunch for his club mates, was to the Bull Hotel. Denbigh. In common with the gravestone it displayed association with the Cyclists Touring Club, with its Headquarters ‘Winged Wheel’ badge. The photo is dated about 1908. For more information on Winged Wheels see http://www.wingedwheels.info/