End to End - a Canadian View

Retired from working in the field of criminal justice, Ted Harrison of Salt Spring Island, British Columbia, is seen here having a brief North Wales break en route from Land's End to John o' Groats. As a member of the Cross Canada Cycle Tour Society, ( www.cccts.org/index.html ), Ted has not only cycled end to end across his own country, but also Mexico and both islands of New Zealand. He allowed himself five weeks for this trip - thanks to the wonder of modern surgery. Ted's had his knee joints surgically replaced during the past year. 'Working beautifully,' he says. 'It's marvellous being free from pain'. 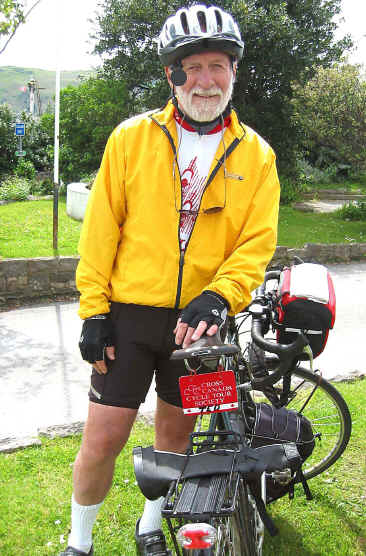 Arriving back in Canada after his ride, Ted wrote:-

You asked how the rest of the ride went.

Well, it was most enjoyable - a memorable experience. Fortunately the weather improved as I made my way north and it never rained a drop during my time in Scotland. I loved the Scottish moors and wished I'd had more time to walk some of them. I had five days to spare when I made John o'Groats so decided to take the ferry over to Orkney and cycle some of the islands. Orkney is certainly a jewel in the British crown and I fell in love with the archipelago, its inhabitants, the relative lack of traffic and the history of some of the places.

B&Bs varied in quality of course but were always clean and decent enough. I take my hat off to British motorists, particularly those driving lorries. Never once was I forced off the road nor felt that a vehicle came too close to me. They were universally careful and courteous, despite being very fast. And on the occasions when I got lost, there was always someone willing to stop and advise.

I ended up riding 1,560 miles in a little less than five weeks. I had ten days with rain during part or all of the day with a north wind on my nose, but the rest of the days offered reasonably pleasant weather and sometimes a tail wind. In fact, I can't think of one negative experience or encounter. People were always warm, kind and generous. There are some daunting hills, especially along some of the B roads and unclassified roads. But this was expected and I had trained accordingly.

Yes, all went very well with the ride. I am very happy I did it.

Of the route, Ted writes follows

The route I followed was outlined in a guide book entitled "Bike Britain: Cycling from Land's End to John o'Groats", written by a Kiwi named Paul Salter, 2002, ISBN 0-9582256-1-3. His route attempts to avoid entirely motorways and A roads, travelling almost entirely on B and unclassified roads. The main advantage, of course, is avoidance of heavy traffic. The disadvantages are twofold, in my view: the hills are more frequent and pronounced and the route more complicated. But in retrospect I believe the advantage outweighs the disadvantages.

More specifically, the main route I followed with overnight stops indicated was:

There were several side trips of course, including Llandudno and Orkney. And sometimes I had to stay in an adjacent town or village because the local establishment was full or not operating.

I often located B&Bs because the guidebook listed them. Alternatively, local Tourist Information Centres were most helpful in this regard.

Highlights include the road from Moniaive to Carsfairn (the nicest ride I've ever had),

Rannock Moor and down into Glen Coe,

and, of course, Orkney.

The warmth and hospitality of the people I met along the route was note-worthy. And the courteous and careful drivers must be once again complimented.