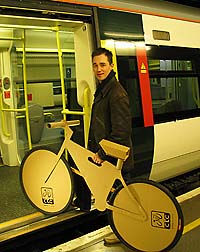 A cyclist at Victoria railway station in London was yesterday given permission by Southern Trains to take his full-size, non-folding bicycle on one of its peak time trains. Despite a recent decision to rigidly enforce a ban on the carriage of this type of bike on its peak-time services, an exception was made because the bike was made from cardboard.

An employee of CTC asked for permission to board the peak-time service with the full-size model bike to draw attention to the fact that the ban is ill-conceived; not only do many peak-time services have enough space to accommodate bikes, but other bulky items – such as full-size cardboard models of bikes – are allowed to travel.

CTC Senior Transport Campaigner, Adam Coffman, said: “Cyclists shouldn’t have to use cardboard bikes to get on peak-time trains; quite apart from anything else they don’t perform well in the wet. The challenge of accommodating cycles on over-crowded trains is best tackled by sensible management rather than rigid policing.”

You can help Emily Thornberry MP, Chair of the All Party Parliamentary Cycling Group (APPCG) has tabled a parliamentary Early Day Motion (EDM 1468), calling for closer integration of cycle and rail travel. MPs need to know of your local experiences of using bikes and trains in order to draw the issue to the attention of Derek Twigg MP, the Minister now responsible for both cycling and rail policy. Please go to www.ctc.org.uk/campaigns from where you can automatically call on your MP to support CTC's campaign to improve bike and rail transport and in particular urge him/her to sign EDM 1468.

This news item is contained in the CTC Newsnet, the weekly email newsletter for CTC members. For those wishing to log on to this useful service, simply send your membership number (or post code) and email address to publicity@ctc.org.uk